How to Avoid Getting Pulled Over by Traffic Police 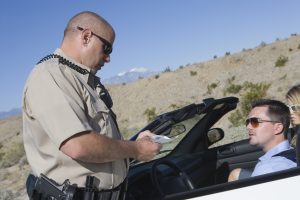 Here are 4 Super Simple Ways to Avoid Getting Pulled Over

1. Drive the speed limit. It’s the most obvious of traffic laws – hence the speed limit signs posted all over the pace, yet it is also the most commonly broken traffic law. Speeding kills. The faster you go, the longer it takes to react to an unexpected situation and the distance you need to stop also increases. There is no

2. Avoid distracted driving. The most common causes of distracted driving are talking on a cell phone, or texting. People often think, ‘It’s just a quick call,” or ‘This text will only take a couple of seconds,’ but more and more we are seeing the wreckage left behind after completing that one simple task on the phone. If you are in the habit of making calls, texting, checking your phone every time it pings with a notification, perhaps you need to turn it off when you get in the car. No call, text or social media notification is worth risking your life over.

3. Hazardous driving ranks number three on most lists but it includes a lot of common violations. Things like failing to stop at a stop sign, running red lights, improper lane changes, tailgating and more. The interesting thing about these violations is that most wouldn’t occur if people weren’t speeding, or driving distracted. There is a snowball effect when it comes to poor driving habits, making the reality of becoming the cause of or involved in an accident all the more likely.

4. Drive equipment that is safe and legal. The trucking industry is heavily regulated when it comes to equipment, but this goes beyond the semi trucks on the road. If your vehicle is being held together by duck tape (yes, we’ve all seen this) then it’s probably not road worthy and is putting you and others at risk. Heavily tinted windows, burned out headlights, broken windshields, burned out turn signal lights and so on make up the majority of the infractions that fall under this category.

If you thought there was some magical gimmick that could keep you from getting pulled over, sorry, you were wrong. Safety on the roadways is the only way to avoid getting nabbed by the police and even better than that – it is the number one way to keep yourself and the motorists around you safe from harm.