Be Prepared: Tornado Season has Started 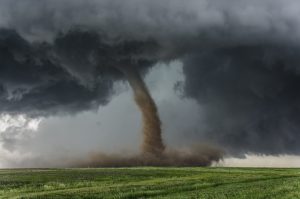 It’s tornado season, actually, there are a few in the United States, and once you factor in that tornado season tends to move northward from late winter to mid-summer; it pretty much lasts all year.

Truck drivers need to be aware of where they are heading and the different unpredictable weather systems they may run into along the way.

Where to Pay Special Attention

While tornadoes can touch down just about anywhere, there are some states and provinces where the conditions tend to be more favourable for a touchdown to occur.

When we think of the places that tornado touch down in the United States, we often think of Tornado Alley, and most of us probably think of Kansas and Oklahoma. In fact, Texas averages 125 tornadoes every year; Oklahoma comes in next with about 57 tornadoes per year; with Kansas and Florida following close behind with 55 each.

A lot of research goes into being able to predict tornadoes and increase warning times for those that may be in the path of a tornado. When it come to tornadoes being prepared is more critical than any other natural event. This is because tornadoes can strike suddenly, sometimes with no warning at all. That is why it is important to know the signs; they key elements that usually come before the twister. If your run into these conditions it is probably time to get the radio on to listen to reports from the National Weather Service:

What to do if you Encounter Tornado Conditions