Speeding in a Semi is Never a Good Idea 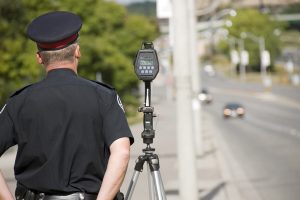 Recently, at an event, I spoke to several professional drivers who had been cited for speeding. One driver was driving through California in a pack of trucks going 62mph. Trucks in California are limited to 55mph. It’s hard to imagine highway patrol in California not pulling over a truck for driving 7mph over the posted speed limit. The driver’s argument was that he was targeted, which maybe true, since he was running with other trucks going the same speed. The officer asked, “If the other trucks drive off the road, would he follow them?” The point is other drivers’ speeding isn’t a good reason for you to speed too. A caravan of trucks offers little protection from a speeding ticket.

Speeding in a Big Truck is Costly

Speeding violations are costly; tickets aren’t issued for a hundred dollars anymore. The violation comes with heavy fines, usually $300 and up. Plus, in Manitoba, speeding violations knock you down a level, or more, on your licence. The cost to renew will be significantly higher each year. It’s a gift the keeps on giving.

High speeds also kill your fuel mileage. Check out our previous article How to get Better Fuel Economy.

Traffic conditions on the road change quickly and speeding can put you in a position where you cannot evade an accident. Professional drivers must understand that there’s a delay in reaction time. From the time you see something happening to when your body actual reacts (hitting the brake to slow down) can take almost 2 seconds. At highway speeds you cover a lot of distance in 2 seconds.

Speeding is dangerous and costly. Our job, as drivers, is to deliver safely; this is always our first priority. The time we gain isn’t significant. We may think we’re gaining time by speeding when our schedules are tight but its mostly psychological. It’s better for everyone to stay compliant at all times with posted speed limits.